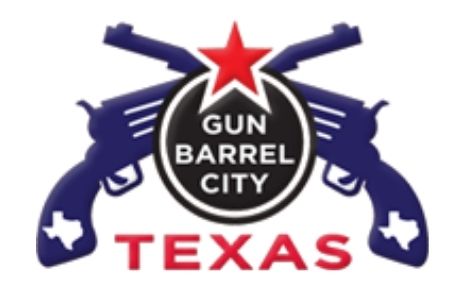 GUN BARREL CITY, TEXAS Gun Barrel City lies on the eastern shore of Cedar Creek Reservoir fifty-five miles southeast of Dallas. The community developed after construction of the reservoir in 1969 and grew rapidly. Sixty residents were reported there in 1970 and 3,526 by the early 1990s. In 2000 the population was 5,145. The town name is derived from its motto, "We Shoot Straight With You," and its symbol, a rifle. Long before the lake was built, Gun Barrel Lane (now State Highway 198) traversed the area. This mud road was a shortcut across Cedar Creek from Mabank to Trinidad and Seven Points. In 1987 community residents began local beautification projects and also collected aluminum cans as a fundraising project to help restore the Battleship Texas (see Battleship Texas State Historical Site). The City has received several State Honored Awards including The Go Texan Award for becoming a Certified Retirement Community in 2009. Gun Barrel City holds two festivals each year, the July 4th Festival/Concert in the Park and the Christmas Festival/Parade. You can visit the festival website at www.gunbarrelcityfestivals.net for more information regarding these events. In comparison to other cities, Gun Barrel City is young but they are the Heart of Cedar Creek Lake and would like to extend some of their East Texas hospitality to you.